Somewhere far off the beaten path, about thirty-eight miles from the city of Nine Times, is a town called Nowhere.  No one is really sure how it got its name, but if you ask someone who lives there, they would most likely say something like…”well, it’s called Nowhere because the old-timers ain’t never been nowhere, and the young-timers ain’t never going nowhere.”

I was born and raised in Nowhere, and was surrounded by friendly and charming people, who seemed to be somewhat frozen in time, as if living in a state of self-imposed limbo.  It was the kind of town where no one locked their doors, car keys were left in the ignition, and children could walk to school and back, never having to worry about their pictures ending ended up on a milk carton.  It was the kind of town where everyone knew everyone.  There was only one traffic light which didn’t work most of the time, but served as a place to hang a twig of mistletoe during the Christmas holiday, and jut say that many a smooch was had under that lone traffic light.

It was true about the old-timers and the young-timers, but not for me.  I had dreams of going somewhere.  I didn’t know where and I didn’t really care where.  I just wanted to get out of Nowhere.  It was a dream I kept to myself, because I wasn’t sure anyone would understand my deep-seated wanderlust.

The most popular place in town was a cafe/bar/pool hall/sit around jaw-jacking/catch up on the local gossip/hole in the wall, called “Right Here.”  If you thought about it for more than a minute, it was sort of comical.  Right Here was right in the middle of Nowhere.

It was owned by Geraldine and Floyd Diggle, who had been sweethearts since the fifth grade.  They had some age on them, and people marveled that after almost 65 years of marriage, they still seemed to enjoy each others’ company.  They spent their golden years, sitting on the front porch, holding hands and rocking in their chairs, reminiscing about days and times gone by.  A few years earlier, they decided to leave the running of the cafe to their three sons, who in polite company would be kindly referred to as “quite the characters.”

Barrett Boone, also known as Bubba, was the oldest and had been named after the great Daniel Boone, from whom the family laid claim to having been directly descended, and the poet Robert Barrett Browning.  Bubba was known as the quiet one.  He looked a lot like his papa, but he had a touch of regret in his eyes, as if they held a painful secret.  It was well known that he didn’t take crap from anyone…especially his brothers, but he had an extremely long rope of patience.

Chester Camp, known as Pockets, was the middle son.  His name came from a city in South Carolina, coupled with his mother’s maiden name.  He was the typical middle child and was known as the one who was a couple of bricks shy of a load but he was a master prankster.  He’d walk into the cafe, Bubba would look at him and ask, “what have you got in your pockets?”
Pockets would innocently say, “I don’t know what you mean,” and then smile like the cat who had just eaten the canary as soon as Bubba turned his back.
You never knew what he had in his pockets, hence the nickname.  His mama once found the corpse of a flattened squirrel inside one of her oven mitts.  When she asked why he had them, he said, “that little squirrel just looked so lonely out there in the middle of the street, and he was cold.”  All she could do was shake her head, give him a hug, and say, “Lord have mercy, child.”

Third, known as Third, was the youngest.  He didn’t have a middle name, but he had all of his hair, most of his teeth, and was quite fetching according to the local single ladies.  When asked why he was named Third, he grinned and said he reckoned it was because his ma and pa had the first, and then had the second, and then had the third.  “I figure,” he said,” they done run out of names by then, so they just give me a number.  “Heck, I’ll answer to just about anything, except son-of-a-bitch.  Ain’t nobody going to be saying that word about my ma.”
Unlike Bubba, there was a twinkle in Thirds’ eye, and it was clear that if any of them was going to be a rebel, it was definitely going to be Third.  He was a jocular fellow who had always danced to a different drummer, and didn’t take life or himself too seriously.  He had a delicious sense of humor and I suspect, like me, wondered about an existence outside Nowhere.

Bubba was the cook.  He could whomp up a steak that might possibly require a chainsaw to cut, or if your taste leaned the other way, serve you one that would holler when you stuck it with a fork.  His homemade apple pie was renowned and could rot your teeth before you ever took a bite, which might explain why two of those boys and many of the townsfolk had so few.  When he cooked up a mess of Collards, the sweet perfume of those greens would waft through the air and spread all through town like a hypnotic spell.  Someone would take a deep sniff and then holler…”eatin’ time!”

All the good ol’ boys would come flying down the street in their pick-ups, ready to tie that red and white checkered napkin around their necks and chow down.  They were proud of those pick-ups, even with the missing bumpers, rusted through beds and plastic over the back window.  And missing a bumper didn’t deter them from proudly displaying a “honk if you love Jesus” sticker somewhere.

Every couple of weeks, ol’ Pete drive would drive up to the cafe on his prized 1892 Waterloo Boy John Deere tractor, used by his daddy and his daddy before him.  It took up most of the real estate in front of the cafe, but weighing close to 300 pounds, he figured he ate two or three times more than the average person, so he didn’t worry much on taking up more than his share of the parking spaces.  He’d waddle in, sit down on his favorite bar-stool and yell, “Bubba, fix me up a juicy piece of cow that’s still a mooin’.”

Of course, there are also the pieces of fabric that men wear, called neck ties.

There are skinny ties, fat ties, and in-between ties.  There are bow-ties and clip-on ties, possibly made for those men in a hurry or maybe because they haven’t been able to master the difficulty of a Windsor knot.

There are reasonably inexpensive ties for those men who only have occasion to wear them once or twice a year and think the idea of putting a useless string around their shirt is ridiculous.  There are high-end ties marketed to the rich, made of the finest silk, surely spun from spiders hiding in the dark crevices of royal castles.

Some ties are beautiful and bear the mark of their famous designer.  Some ties are so ugly, they make you scratch your head and wonder what someone was thinking.  Some ties boast a theme park or scenes from a distant country.  Some ties bear stains, and offer a slight whiff of a long ago supped dinner.

Some ties bring back memories of yesteryear and either make you smile or wince.

Some ties are kept far beyond their expiration date.  Others are tossed aside like old lovers, until one day…someone sees the beauty in what once was, and rescues them to be refashioned into a work of art, made to warm you on a chilly night…and maybe bring back memories of yesteryear…and yes, maybe smell like old men.

This quilt was made from 264 different ties.  66 labels were used in the center. 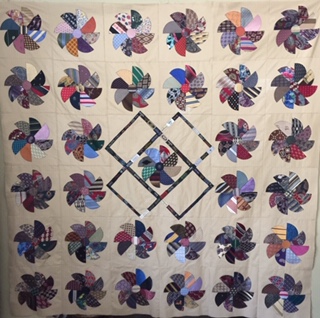